Adam Weber’s research team sits together in a cluster of offices, cubicles, and laboratories deep in the labyrinth of the Department of Energy’s (DOE's) Lawrence Berkeley National Laboratory’s (Berkeley Lab) Buildings 62 and 70.

A staff scientist/engineer who won a Presidential Early Career Award for Scientists and Engineers in 2014, Weber has now collected a solid and multidisciplinary group of undergraduate, graduate, postdoctoral, and staff electrochemists, chemical engineers, mechanical engineers, theorists and material scientists.

The group works together to understand and optimize next-generation hydrogen fuel-cell and related energy-conversion and energy-storage components and materials--bringing more efficient, better performing, and less expensive hydrogen technologies onto the industry stage.

Weber breaks down the breadth of their hydrogen research into three categories: 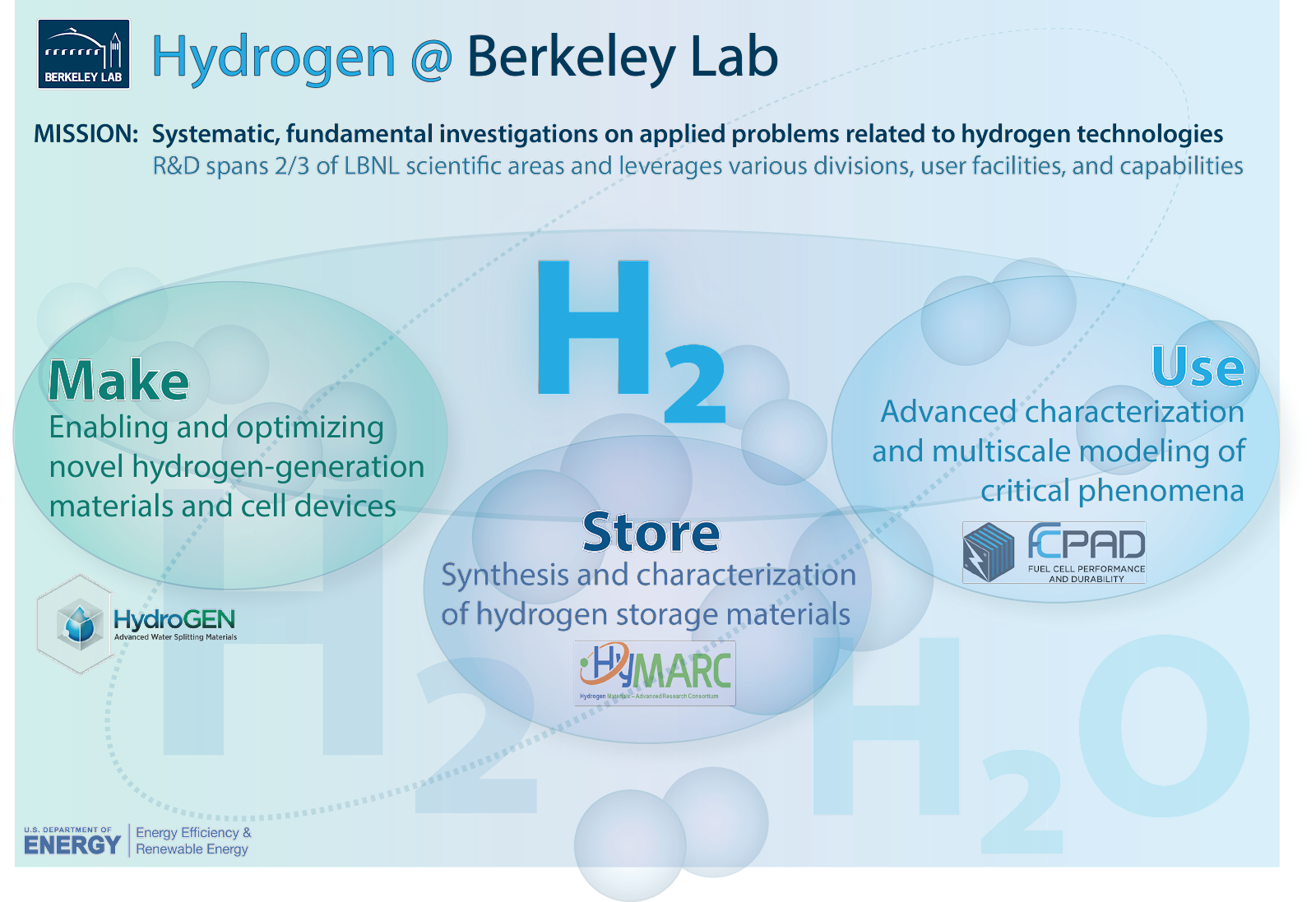 With the support of DOE’s Energy Efficiency and Renewable Energy Office’s Fuel Cell Technologies Office, the team’s research on the "make" side of the paradigm runs through the HydroGen consortium, their "store" research through the HyMARC consortium, and their "use" research through the FC-PAD consortium. All three collaborations of U.S. national laboratory researchers, academics, and industry, with a focus on concentrating expertise from the DOE's national laboratory assets to advance hydrogen fuel research. Breakthroughs coming out from these consortia will also support DOE’s [email protected] initiative to enable affordable large scale hydrogen production, storage, transport and utilization across multiple sectors.

Researcher Nem Danilovic works with Weber on the HydroGen Consortium’s energy materials network, whose main focus is to develop advanced materials for devices that split water molecules to create hydrogen. Taking advantage of Berkeley Lab’s advanced equipment and collaborating with other laboratories, universities and researchers around the country, the consortium embodies “team science,” bringing multidisciplinary teams together to advance the understanding and development of hydrogen materials and technologies.

“A lot of the narrative around hydrogen has been centered around the conventional technologies used to make hydrogen, where you pay a carbon dioxide penalty,” Danilovic said. “Most of the hydrogen produced today comes from natural gas. One focus now is to look at other ways to produce hydrogen using low-cost energy from the grid or other renewable sources.”

Some at Berkeley Lab have become so interested in hydrogen technology that they have purchased fuel cell cars at home. Here at lower right, Berkeley Lab Deputy Director for Research Horst Simon poses with his Toyota Mirai. "After I learned more about the hydrogen research at the lab, I became convinced that hydrogen fuel cells are the best overall approach to zero emission vehicles," he says. "So I was willing to become an early adopter of the technology, and was surprised about what is already available in terms of quality and reliability. I enjoy driving my ZEV car and using the carpool lane, this works perfectly for my long commute. I also enjoy answering questions about the technology, and relate my car back to work at the lab."

On the “use” side, Weber and his team’s research focuses on hydrogen fuel cells, making them less expensive by optimizing their performance--or optimizing conditions so that less materials or less cells are required. Rather than just looking at fuel cells for automobiles, Weber’s team is increasingly focused on heavy-duty vehicles like trucks, and their specific needs. For example, hydrogen fuel cells can help trucks meet idling requirements, as they have zero emissions at the tailpipe.

“Hydrogen is great if you are worried about range or power densities over the long term,” Weber said. “Our research looks at transitioning from light-use vehicles to medium- and heavy-duty vehicles—for things like trucking and shipping and for uses in rail and maritime sectors. We’re tackling some of the critical issues with fuel cells, working to increase efficiency, and looking at how to achieve the increased power you need for these applications without sacrificing lifetime.”

On the “store” side, materials scientists at Berkeley lab are currently focused on understanding how to store hydrogen at lower pressures through advanced materials including metal-organic frameworks and nanoscale hydrides. The hope is to allow for reversible hydrogen storage at benign conditions. In addition, for longer transport of hydrogen, chemical carriers are being investigated, kind of like having hydrogen piggy back on molecules in liquids.

Meet Some of the Berkeley Lab Hydrogen Research Team: