They say diamonds are forever, but diamonds in fact are a metastable form of carbon that will slowly but eventually transform into graphite, another form of carbon. Being able to design and synthesize other long-lived, thermodynamically metastable materials could be a potential gold mine for materials designers, but until now, scientists lacked a rational understanding of them.

Now researchers at the Department of Energy’s Lawrence Berkeley National Laboratory (Berkeley Lab) have published a new study that, for the first time, explicitly quantifies the thermodynamic scale of metastability for almost 30,000 known materials. This paves the way for designing and making promising next-generation materials for use in everything from semiconductors to pharmaceuticals to steels.

“There’s a great amount of possibility in the space of metastable materials, but when experimentalists go to the lab to make them, the process is very heuristic—it’s trial and error,” said Berkeley Lab researcher Wenhao Sun. “What we’ve done in this research is to understand the metastable phases that have been made, so that we can better understand which metastable phases can be made.”

The research was published last week in the journal Science Advances in a paper titled, “The Thermodynamic Scale of Inorganic Crystalline Metastability.” Sun, a postdoctoral fellow working with Gerbrand Ceder in Berkeley Lab’s Materials Sciences Division, was the lead author, and Ceder was the corresponding author.

The study involved large-scale data mining of the Materials Project, which is a Google-like database of materials that uses supercomputers to calculate properties based on first-principles quantum-mechanical frameworks. The Materials Project, directed by Berkeley Lab researcher Kristin Persson, who was also a co-author of the new paper, has calculated properties of more than 67,000 known and predicted materials with the goal of accelerating materials discovery and innovation.

“Materials design and development is truly a slow process but is now being greatly accelerated by the fact that we can compute properties of compounds before they are made,” Ceder said. “Although we still don’t fully understand which materials can be made and how, mapping the underlying thermodynamics is an important first step.”

Bridging a Gap in the Fundamental Paradigm of Materials Science

Metastable materials, or materials that transform to another state over a long period of time, are ubiquitous in both nature and technology and often have superior properties. Chocolate, for example, is metastable, with a lower melting point and better texture than stable chocolate. There are also metastable steels that have both toughness and strength, properties not normally found simultaneously in most stable steels.

Scientists would love to develop new materials with certain properties for various applications—an ultra-strong yet lightweight metal for vehicles, for example—but to make any new material with desired properties, materials scientists must understand how synthesizing the material influences its structure, and then how the structure in turn affects its properties and performance. This, Sun explains, is the fundamental paradigm of materials science.

“The Materials Project has helped us link a material’s structure to its properties,” Ceder said. “What we’ve done here is the first quantitative step in understanding synthesis-structure relationships.” 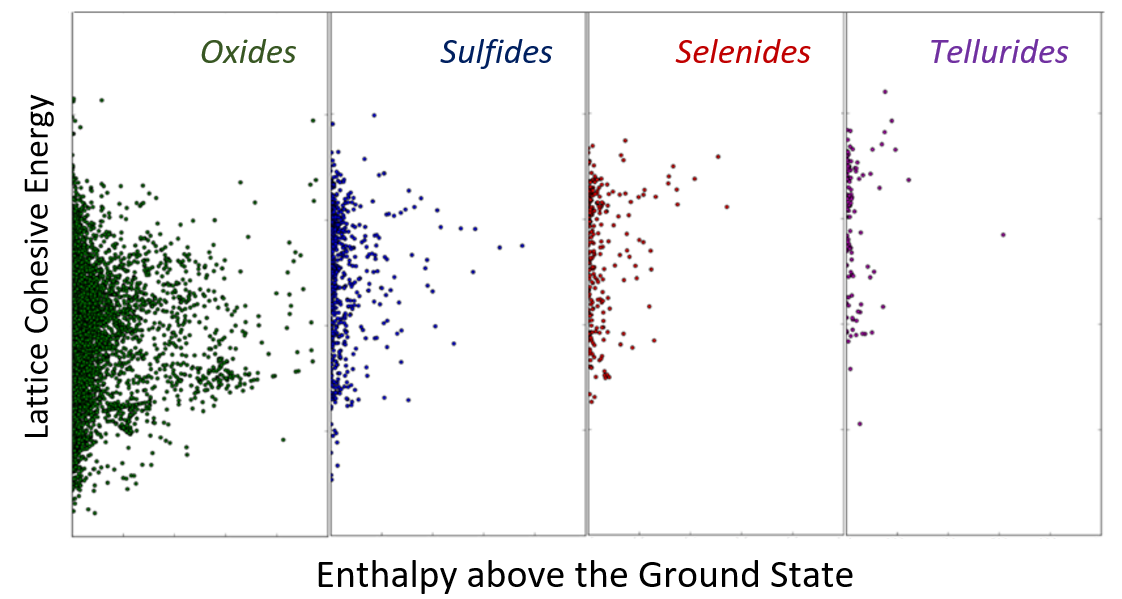 Sun offers an analogy to food: “If the Materials Project were a cookbook, it’d be like a database of ingredients and delicious dishes but no recipes. Designing recipes is difficult because scientists have a poor understanding of why metastable phases appear during ‘cooking.’ There are some applications where a metastable material is better, and others where the stable phases are better. This study sets a foundation to investigate how to use computers to predict recipes.”

Proposing a New Principle of Metastability

Previously, scientists had thermodynamic numbers for less than 1,000 metastable compounds. “It’s very hard to survey metastability over known materials because there’s not much data out there in terms of calorimetry, which is measuring thermodynamic numbers,” Sun said.

What’s more, metastable materials come in many forms, spanning metal alloys and minerals to ceramics, salts, and more, making a comprehensive survey difficult. “What we’ve done is large-scale data mining on nearly 30,000 observed materials to explicitly measure the thermodynamic scale of metastability, as a function of a wide variety of parameters, like chemistry and composition, which inorganic chemists and materials scientists can use to build intuition,” Sun said.

Based on their observations, the researchers went a step further, to propose a new principle they term “remnant metastability” to explain which metastable materials can be synthesized and which cannot. “We’re essentially proposing search criteria­⎯we’re identifying which crystalline materials can be made, and possibly under what conditions they can be made,” Sun said. “We hope this can be a more refined way to think about which crystal structure nature chooses when a material forms.”

The other co-authors of the paper are: Anubhav Jain of Berkeley Lab, Stephen Dacek and William Richards of MIT, Shyue Ping Ong and Anthony Gamst of UC San Diego, and Geoffroy Hautier of the Université Catholique de Louvain in Belgium. The research was supported by the Materials Project and was a collaboration with the DOE’s Office of Science as part of its Center for Next Generation of Materials by Design, a DOE Energy Frontier Research Center. The researchers also used computing resources at the Center for Nanoscale Materials (CNM) at Argonne National Laboratory and well as resources at the Center for Functional Nanomaterials (CFN) at Brookhaven National Laboratory. CNM and CFN are DOE Office of Science User Facilities.