A grant of nearly $2 million was recently awarded to install energy-saving, thin-glass triple-pane windows in low-income communities in California. Thanks to years of investment and support from the California Energy Commission (CEC) and the Department of Energy (DOE), this project will work with industry partners to deploy superior windows in California homes.

Windows are often referred to as the weakest link in the thermal envelope of a building. Even in buildings with well-insulated walls, energy leaking through windows leads to significant energy costs and decreased comfort for occupants, both in colder and warmer climates.

Buildings account for a whopping 40% of total U.S. energy consumption, and windows are responsible for approximately 10% of that. To increase the energy efficiency of buildings and meet emissions reduction goals, and with support from DOE’s Building Technologies Office, researchers at DOE’s Lawrence Berkeley National Laboratory (Berkeley Lab) have been innovating high performance windows for more than 40 years.

One of the team’s most impactful projects was the development of low-emissivity (low-e) window coatings that help to block long-wave infrared rays, which improves a window’s insulating properties. The products and industry partnerships that have resulted from Berkeley Lab’s research have saved the U.S. billions of dollars in energy costs.

This $1.85 million grant is made possible by the CEC’s Electric Program Investment Charge Program (EPIC), and the funding will allow the team to retrofit thin-glass triple-pane windows into two multi-family buildings, each with eight tenant units, and 30 single-family housing units, all located in low-income California communities. 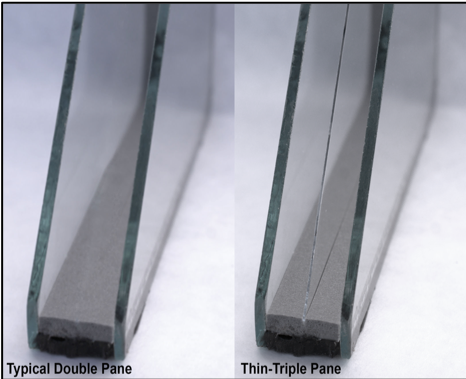 High thermal performance windows reduce combined heating and cooling energy consumption of typical single family homes in California by up to 50% compared to existing single-pane windows, which are still found in 6.5 million, or 50%, of homes in California. If all existing buildings were retrofitted with thin-glass triple-pane windows, this could provide a potential benefit to California homeowners of nearly $1 billion per year, and lead to greater resilience during power failures as well as increased occupant comfort.

Berkeley Lab's thin-glass triple-pane insulating glass unit (IGU) concept is constructed  like traditional triple-pane IGUs, but utilizes thin-glass as the center pane, a single spacer and krypton gas fill, enabling the IGUs to directly replace industry standard double-pane IGUs. These innovative windows offer increased thermal performance at a more affordable price than other commercially available triple-pane windows, which have existed in the market since the early 1980s, but have not been widely adopted due to high costs. Thin-glass triple-pane windows were designed to easily replace existing double-glazed windows without having to modify the window frame, making them a more cost-effective market-ready technology.

With continued support from the CEC and DOE, Berkeley Lab researchers now aim to provide a rigorous evaluation of the long-term performance and verify the quality of installed thin-glass triple-pane windows in disadvantaged communities. All of the sites selected for this demonstration project are located in low-income communities, where there is often poor construction with limited insulation as well as poor air quality. The hope is that by replacing low performance and leaky windows at these sites, occupants will benefit from lower utility bills, increased comfort during cold spells and heat waves and reduced exposure to poor air quality.

“By partnering with building and window manufacturers, including Ply Gem and Simonton from Cornerstone Building Brands, we hope that this demonstration project will remove barriers to the development and widespread adoption of highly insulating window technologies in the retrofit and new construction markets,” said Principal Scientific Engineering Associate Robert Hart, who is the lead researcher on highly insulating windows. “With more widespread adoption, energy-efficient technologies such as thin-triple windows, can become even more affordable and accessible.” Ply Gem has the capacity to produce the thin-glass triple-pane windows in Sacramento, and they have a dealer network throughout California in both the retrofit and new construction markets.

Super Window Could Save Billions in Energy Costs