For more than 50 years, the annual R&D 100 Awards have recognized 100 technologies of the past year deemed most innovative and disruptive by an independent panel of judges. The full list of winners, is available at the R&D World website.

A Tool to Accelerate Electrochemical and Solid-State Innovation

Solid electrolytes have been displacing liquid electrolytes as the focus of electrochemical innovation because of their performance, safety, and cost advantages. However, the lack of effective methods and equipment for studying solid electrolytes has hindered advancement of the technologies that employ them. This microelectrode cell meets the testing needs, and is already being used by Berkeley Lab scientists.

The lithium battery market is expected to grow from more than $37 billion in 2019 to more than $94 billion by 2025. However, the liquid electrolytes used in most commercial lithium-ion batteries are flammable and limit the ability to achieve higher energy densities. Safety issues continue to plague the electronics markets, as often-reported lithium battery fires and explosions result in casualties and financial losses.

In Berkeley Lab’s solid lithium battery, the organic electrolytic solution is replaced by two solid electrolytes, one soft and one hard, and lithium metal is used in place of the graphite anode. In addition to eliminating battery fires, incorporation of a lithium metal anode with a capacity 10 times higher than graphite (the conventional anode material in lithium-ion batteries) provides much higher energy densities.

The technology was developed by ESDR scientists (pictured left to right) Marca Doeff, Guoying Chen, and Eongyu Yi, along with collaborators at Montana State University.

The buildings sector is the largest source of primary energy consumption (40%) and ranks second after the industrial sector as a global source of direct and indirect carbon dioxide emissions from fuel combustion. According to the World Economic Forum, nearly one-half of all energy consumed by buildings could be avoided with new energy-efficient systems and equipment.

The Building Efficiency Targeting Tool for Energy Retrofits (BETTER) allows municipalities, building and portfolio owners and managers, and energy service providers to quickly and easily identify the most effective cost-saving and energy-efficiency measures in their buildings. With an open-source, data-driven analytical engine, BETTER uses readily available building and monthly energy data to quantify energy, cost, and greenhouse gas reduction potential, and to recommend efficiency interventions at the building and portfolio levels to capture that potential.

It is estimated that BETTER will help reduce about 165.8 megatons of carbon dioxide equivalent (MtCO2e) globally by 2030. This is equivalent to the CO2 sequestered by growing 2.7 billion tree seedlings for 10 years.

Quantum communication, cybersecurity, and quantum computing are growing global markets. But the safety of our data is in peril given the rise of quantum computers that can decode classical encryption schemes.

The Matter-Wave Modulating Secure Quantum Communicator (MMQ-Com) technology is a fundamentally new kind of secure quantum information transmitter. It transmits messages by modulating electron matter-waves without changing the pathways of the electrons. This secure communication method is inherently impervious to any interception attempt.

A novel quantum key distribution scheme also ensures that the signal is protected from spying by other quantum devices.

The development team includes Alexander Stibor of Berkeley Lab’s Molecular Foundry along with Robin Röpke and Nicole Kerker of the University of Tübingen in Germany.

The Porous Graphitic Frameworks (PGF) technology is a lithium-ion battery cathode that could outperform today’s cathodes in sustainability and performance.

In contrast to commercial cathodes, organic PGFs pose fewer risks to the environment because they are metal-free and composed of earth-abundant, lightweight organic elements such as carbon, hydrogen, and nitrogen. The PGF production process is also more energy-efficient and eco-friendly than other cathode technologies because they are prepared in water at mild temperature

s, rather than in toxic solvents at high temperatures.

PGF cathodes also display stable charge-discharge cycles with ultrahigh capacity and record-high energy density, both of which are much higher than all commercial inorganic cathodes and organic cathodes known to exist. 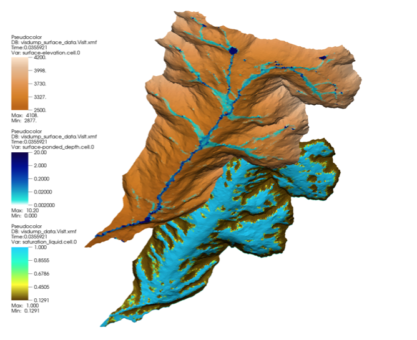 Scientists use computer simulations to predict the impact of wildfires on water quality, or to monitor cleanup at nuclear waste remediation sites by portraying fluid flow across Earth compartments. The Amanzi-Advanced Terrestrial Simulator (ATS) enables them to replicate or couple multiple complex and integrated physical processes controlling these flowpaths, making it possible to capture the essential physics of the problem at hand.

“Specific problems require taking an individual approach to simulations,” said Sergi Molins, principal investigator at Berkeley Lab, which contributed expertise in geochemical modeling to the software’s development. “Physical processes controlling how mountainous watersheds respond to disturbances such as climate- and land-use change, extreme weather, and wildfire are far different than the physical processes at play when an unexpected storm suddenly impacts groundwater contaminant levels in and around a nuclear remediation site. Amanzi-ATS allows scientists to make sense of these interactions in each individual scenario.”

Institute for the Design of Advanced Energy Systems (IDAES)

By providing rigorous modeling capabilities, the IDAES Modeling & Optimization Platform helps energy and process companies, technology developers, academic researchers, and DOE to design, develop, scale-up, and analyze new and potential PSE technologies and processes to accelerate advances and apply them to address the nation’s energy needs. The IDAES platform is also a key component in the National Alliance for Water Innovation, a $100 million, five-year DOE innovation hub led by Berkeley Lab, which will examine the critical technical barriers and research needed to radically lower the cost and energy of desalination.