A new type of device that has the potential to efficiently store vast amounts of energy has recently been effectively reconfigured and improved by researchers at Lawrence Berkeley National Laboratory (Berkeley Lab). This breakthrough could be a stepping-stone to helping our evolving power grid become more resilient. 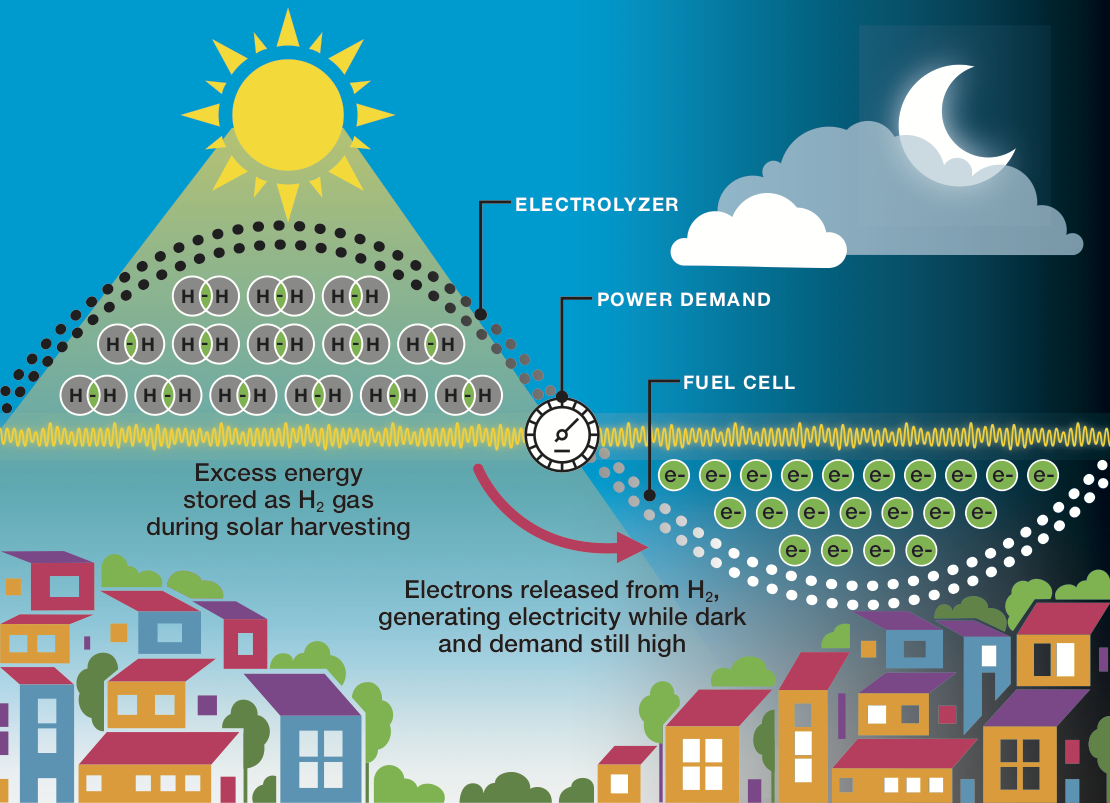 Renewable energy sources such as solar and wind are becoming increasingly economical and necessary additions to the current power grid, particularly in a time of extreme weather events and wildfires that can impact power supply, but these distributed energy resources pose significant challenges to balancing energy supply and demand. One of the key solutions to better integrating renewable energy and creating a more stable and resilient electrical grid is long term energy storage. Berkeley Lab researchers recently demonstrated that a unitized regenerative fuel cell (URFC) has substantial potential as an efficient and cost-effective solution to help make long term energy storage viable.

URFCs are energy storage devices that can efficiently store vast amounts of energy at a lower cost compared to batteries. They convert electrical energy to and from chemical bonds in hydrogen, which is why a URFC is called a bidirectional energy-conversion device. In a more common fuel cell, electrochemical energy conversion uses two discrete proton-exchange membrane (PEM) devices, the fuel cell and the electrolyzer, which adds significant capital costs. URFCs, on the other hand, can reduce capital costs if one PEM device can achieve a high ratio of energy output to energy input, otherwise known as high Round-Trip Efficiency (RTE).

The typical RTE of a battery storage technology is in the range of 70% - 90%, while discrete fuel cell and electrolyzer devices have typically achieved a lower RTE with higher capital costs. Nemanja Danilovic and Adam Weber, researchers in Berkeley Lab’s Energy Storage and Distributed Resources Division, set out to identify a competitive configuration for URFCs to achieve a higher RTE.

“We wanted to push the limits of RTE by taking advantage of the electrochemistry, and improving mass transport,” said Danilovic. “By pairing the hydrogen and oxygen reactions with each electrode we were able to show improved RTE and durability to what has been published to date.”

This competitive URFC configuration is unconventional in that it has hydrogen and oxygen reactions both occurring on each electrode, whereas in traditional URFCs both oxygen reactions take place on one electrode and both hydrogen reactions take place on the other electrode.  In their study, published in Energy and Environmental Science, Danilovic and Weber show that this unconventional URFC configuration has the potential to operate at higher current densities and RTEs than traditional URFCs, achieving up to 60% RTE.

“Interestingly, even though this mode of operation should have limited durability, we showed that we retained a high RTE over 10,000 cycles, which would be 27 years of daily cycling,” said  Danilovic.

The research team expects these assessments will lead to future studies of optimal materials and configurations of URFCs. Ultimately these URFC discoveries will support the development of cost-effective and efficient long term energy storage, which is key to a secure energy future and an important ingredient in the development of a modernized power grid.