This was one day of a four-day annual institute held by the Building Efficiency for a Sustainable Tomorrow Center (BEST) on January 4, 2018. The institute, funded by the National Science Foundation and managed by Laney College in Oakland, advances education for tomorrow's building technicians. Mary Ann Piette, Director for the Building Technology and Urban Systems division at Berkeley Lab and the project's lead, said that this is the fourth such event held at Berkeley Lab. Janie Page organized the event, which combined lectures and hands on activities in support of the institute's theme, "Buildings as Information Systems". 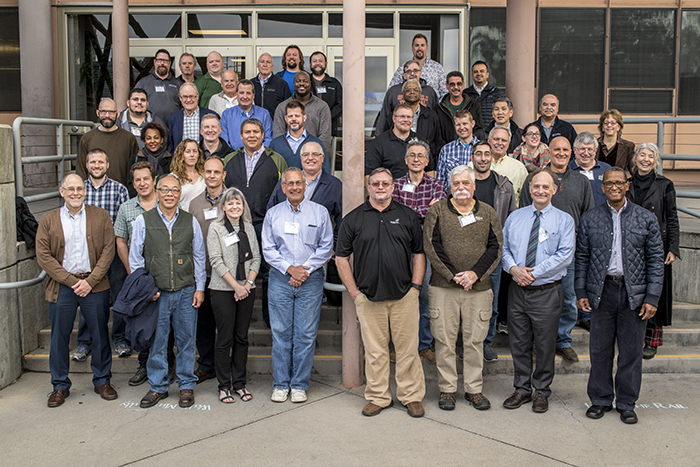 A key element of the workshop focused on team efforts to determine why energy use was higher than expected in a test cell at FLEXLAB®, an advanced building efficiency testbed . Participants were divided into groups, with each group placing two data loggers to monitor internal environmental conditions in the test space. Based on data collected by the loggers, each group later analyzed what conditions changed in the space during the first half of the day.  They identified a sharp spike in energy demand arising about an hour after sensors were placed in the space, which turned out to arise from a heat source being stored unusually close to the thermostat in the space.  Such scenarios are not uncommon, and participants were able, through the team exercise, to identify the best ways to monitor spaces for such problems.

Understanding the data from sensors was a continuing theme throughout the workshop. A presentation by Guanjing Lin and Claire Curtin, program managers in BTUS, examined a wide range of energy information system graphs to uncover some of the most common ways to enhance the efficiency of commercial building operations.

Because commercial buildings typically consume a large percentage of the energy produced in the U.S, making them more efficient can have a significant impact on efforts to reduce the anthropogenic aspects of climate change. Berkeley Lab’s Climate and Ecosystem Sciences Division Faculty Scientist Lara Kueppers gave a presentation on the ecological impacts of climate change including details about how temperature variations, and associated changes in available water, are impacting the ranges of some tree species, and how this in turn impacts ecosystem organization and ecological resilience.

Participants came away from the day’s activities and discussions with a wealth of new information and ideas for classroom activities that they can use with their students.