Berkeley, CA — The price of solar photovoltaic (PV) systems installed on homes and small businesses spans a wide range, and researchers from the U.S. Department of Energy’s Lawrence Berkeley National Laboratory (Berkeley Lab) have published a new study that reveals the key market and system drivers for low-priced PV systems.

Berkeley Lab’s Ryan Wiser, a co-author of the study, explains, “Despite impressive recent cost reductions, installed prices for small-scale PV systems in the United States continue to show wide pricing differences depending on the location of the installation, the installer, the components of the system, and other factors. Our work seeks to pinpoint the characteristics of recently-installed PV systems at the lower end of the observed solar price range.”

According to Greg Nemet of the University of Wisconsin-Madison and the lead author of the report, “We find that low-priced PV systems, those cheaper than 90 percent of other systems nationally, are more prevalent in local markets with fewer active installers, and are more likely to be installed by companies that have more county-level experience installing PV systems. Not surprisingly, low-priced PV systems are also associated with a variety of system characteristics. For example, such systems are more likely to be customer owned (vs. leased), be larger in size, and use lower-efficiency modules; and are less likely to use tracking, building-integrated PV modules, micro-inverters, and batteries.” 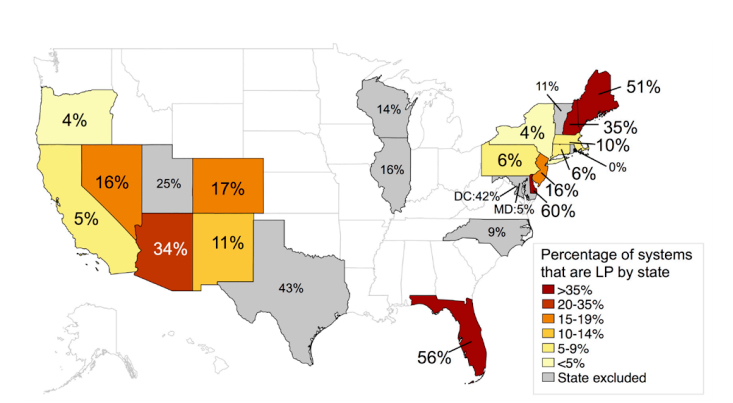 Percentage of systems that are LP by state.

The analysis also finds significant variations across states. After accounting for other differences among markets, PV systems are more likely to be low-priced in Maine (51 times more likely than California, the “reference” state in the statistical analysis), Arizona (23 times more likely), New Hampshire (10 times), New Mexico (4 times), and New Jersey (3 times). Finally, the research finds that policy incentives can affect the prevalence of low-priced systems, though those influences are nuanced and require additional analysis to fully verify.

“Widespread adoption of PV will depend, in part, on the economics of those systems,” explains Ryan Wiser. “By studying the attributes of low-priced PV systems, we can begin to identify what can be done to facilitate those conditions and thereby drive down PV system prices nationwide.”

Berkeley Lab and researchers at the University of Wisconsin-Madison, Yale University, the University of Texas-Austin, and the National Renewable Energy Laboratory collaborated on the study. The work draws upon Berkeley Lab’s Tracking the Sun report series, which monitors trends in the installed price of PV systems in the United States.

The study focuses on systems ranging in size from 1 to 15 kiloWatts, and used a variety of statistical methods to analyze a dataset of over 40,000 PV systems in 15 U.S. states.

The report, Characteristics of Low-Priced Solar Photovoltaic Systems in the United States, may be downloaded here, along with a factsheet and summary slide deck.

A webinar presentation of key findings from the report will be held on January 25th, at 10:00 am Pacific Time (1:00 pm Eastern Time).

The research was supported by funding from the U.S. Department of Energy SunShot Initiative.