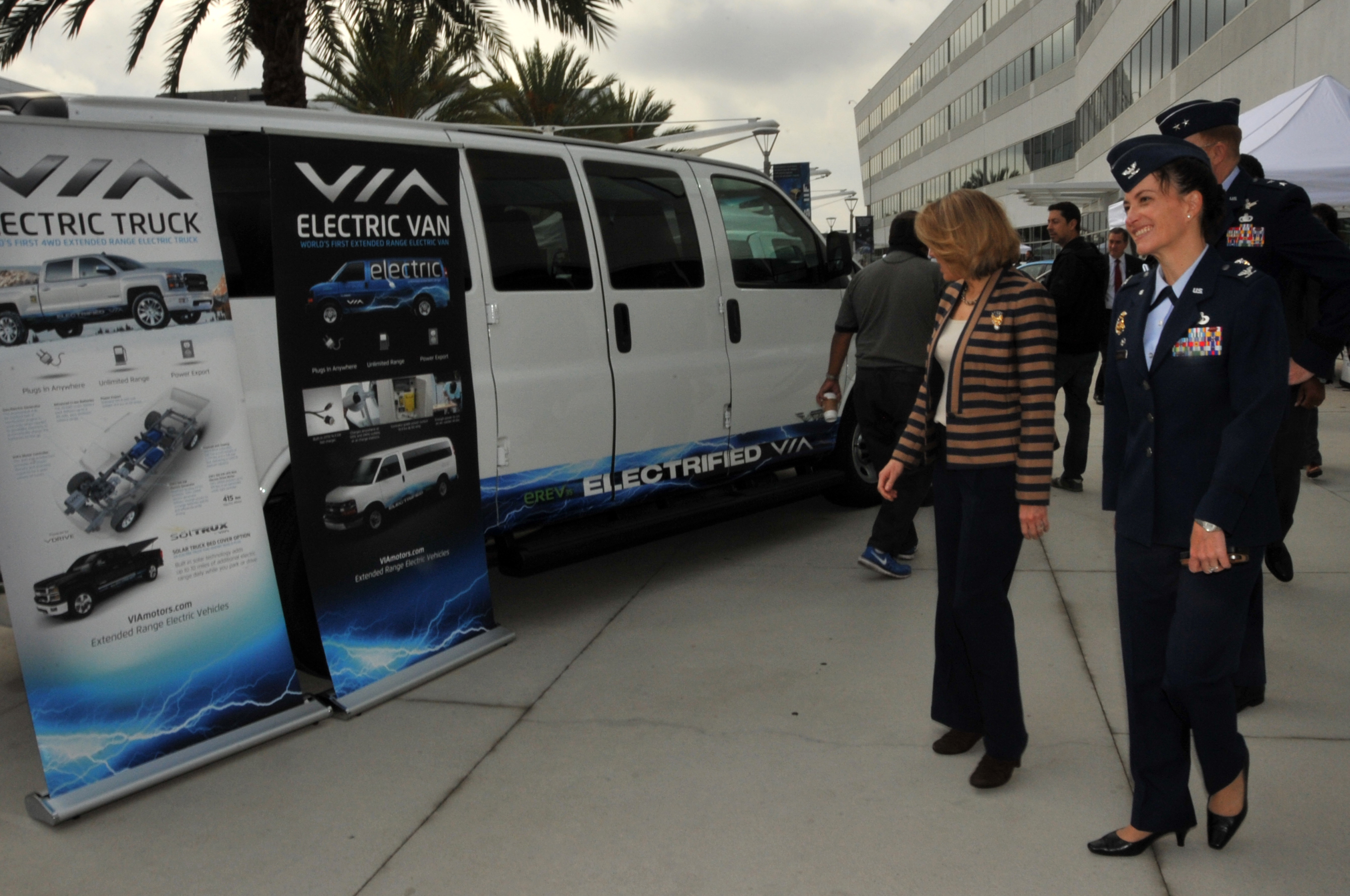 Soon, for the first time, a group of researchers will connect a fleet of plug-in electric vehicles (PEVs) to the electricity grid in Southern California in a test of the connected fleet's ability to provide the grid with power and excess storage capacity.

The fleet of 42 PEVs at the Los Angeles Air Force Base (LA AFB) will be controlled by a sophisticated system using technologies developed by Lawrence Berkeley National Laboratory (Berkeley Lab), Akuacom, and Kisensum. The use of vehicle batteries to help buffer the needs of the electricity grid is called Vehicles-to-Grid (V2G), and its use is expected to grow as electric vehicle use expands in California and the rest of the United States.

"This project is the first time that cars will be used in very fast electric wholesale power markets to address the needs of the electric grid," says Douglas Black, a mechanical engineer in the EETD.

The LA AFB is the first federal facility to replace 100 percent of its general-purpose vehicles with plug-in electric vehicles. This fleet is the largest plug-in electric vehicle fleet on a federal facility and the largest V2G demonstration in the world. The fleet can provide more than 700 kilowatts (kW) of electric power—enough to run 140 typical American homes on a summer afternoon.

At a recent public roll-out of the fleet, Secretary of the Air Force Deborah Lee James said: "Everything we do to fly, fight, and win requires energy, whether it's aviation fuel for our aircraft or power to run the bases that support them. This vehicle-to-grid pilot is a great example of how Airmen are driving the Air Force forward and finding new and innovative ways to make every dollar count."

The operators of the electric grid need to bring additional supplies of electricity online or ramp down power production at any time to match demand; otherwise, an unbalanced electric grid will fail, and blackouts will cascade across the system. The grid's conditions are always changing. On hot summer days, air conditioning causes demand to increase, and it falls as day turns to evening. Electric lights go on at night; toasters and coffeemakers during breakfast in the morning. Factories may operate at any or all hours of the day and night. Demand fluctuates, often unpredictably, and one of the grid operator's tasks is to match supply to demand as it changes.

With the addition of more renewable electricity from solar and wind sources, balancing demand will become even more critical. Renewable power sources are intermittent, and their output does not necessarily match demand. The California Independent System Operator (CAISO) expects that by 2015, the growth in power available from renewable sources, especially solar, will require the grid operator to manage a 14,000-megawatt (MW) swing in load during the 5 to 6 pm hour, when the sun sets (reducing power from renewable sources) and lights start to go on in buildings for the evening. That is twice the load swing in 2013. Consequently, CAISO is searching for additional ancillary services—power that it can bring online quickly to help match demand on the grid.

These V2G technologies offer one solution to this need, and they also offer a solution to another need in the transportation sector. Plug-in electric vehicles are clean vehicles. Their greenhouse gas emissions (from battery charging) and emissions of particulates and nitrogen oxides are much lower than the direct emissions from conventional automotive fleets. California's 2013 ZEV Action Plan goal is to put 1.5 million zero emission vehicles on the road by 2025. However, plug-in electric vehicles have higher purchase prices and operating costs (because of battery pack replacement) than conventional cars.

The higher cost to buy and operate PEVs has slowed their adoption in the marketplace. Using the electricity storage capacity of PEV fleet batteries can help make their economics more favorable. Bidding power from PEV fleets' batteries into the CAISO power markets could help meet rapid load swings load on the grid, and provide a revenue stream to fleet owners that offsets their high costs.

Enter the U.S. Department of Defense. An Executive Order requires federal agencies, including DoD, to reduce their fleet's total consumption of petroleum products by two percent annually, and to use plug-in hybrid vehicles when available at a reasonably comparable cost. Another federal mandate requires DoD to prefer the lease or procurement of motor vehicles using electric or hybrid propulsion systems, if comparable in cost. The DoD has identified V2G as a key technology for development in its efforts to meet these requirements. Its current non-tactical fleet totals 200,000 vehicles.

Setting up this research project has required a significant effort to bring together many players—the LA AFB is located in Southern California Edison service territory. Although designated an Air Force base, it consists primarily of buildings. The mission of LA AFB's staff is to manage defense contracts with the nearby aerospace industry—there are no runways or aircraft at the base, but there is about 90,000 square meters of office space.

The project has other participants, all of whom are working together to pioneer the V2G solution. Selling ancillary services into the California electric grid requires CAISO oversight. The hardware to manage the scheduling of the fleet's power sales into the CAISO power market is provided by Akuacom's DRAS (Demand Response Automation Server), which uses software that follows the Open Automated Demand Response protocol developed by Berkeley Lab's Demand Response Research Center to allow grid operators, utilities, and customer sites to communicate in a common language.

Software provided by Kisensum will manage fleet and charging services. The software schedules services requested of the fleet and collects data about fleet status, including the charge state of each vehicle. The software also manages the charge stations, and charging and discharge of vehicles. When the CAISO requests that power from the fleet be discharged into the electric grid, this software manages that process.

Finally, Berkeley Lab's DER-CAM (Distributed Energy Resources Customer Adoption Model) software uses data about the state of the fleet and the opportunities in the ancillary services market to forecast the market's prices and grid energy requirements, weather, and other factors, and generate optimal scheduling for the fleet. Collectively these technologies are called the PEV Fleet Optimization Model (PEV2GOpt).

There are technological challenges to making this system function, as well as policy and regulatory challenges that must be overcome. Southern California Edison has worked to address the regulatory barriers and to establish the V2G interconnection.

"This is pioneering research," says Black. "We are paving the way for a diverse set of stakeholders to work together. What we're doing will provide a model for expanding V2G throughout the U.S."

A portion of the PEV fleet of 42 cars has been delivered to LA AFB. The research team is installing equipment for testing throughout the month. The Air Force's PEV fleet at the LA AFB will include both electric and hybrid vehicles, and will consist of 19 sedans, 5 pick-up trucks, 13 vans, 4 medium-duty trucks, and one 12-passenger bus.

The goal of this research is to assess how much the revenue from providing electricity services to the grid can offset the cost of buying and managing a PEV fleet, as well as the potential benefits to the grid of V2G services. The researchers also hope to assess the economic viability of converting more of DoD's non-tactical fleet to PEVs. The V2G installations are best suited to smoothing out small discrepancies between electric demand and supply that require extremely quick responses—within seconds of being called up, what the CAISO terms "regulation." They are not currently considered as operating reserves, which provide sustained back-up power in the event of, for example, a power plant failing—PEV fleets currently cannot discharge enough power for several hours to make up for a large shortfall of that sort.

"If we are successful, we will show that the increased cost of electric vehicles can be offset with the value they can extract from the marketplace, which will increase their adoption and accelerate the reduction of greenhouse gases from transportation," says Black.